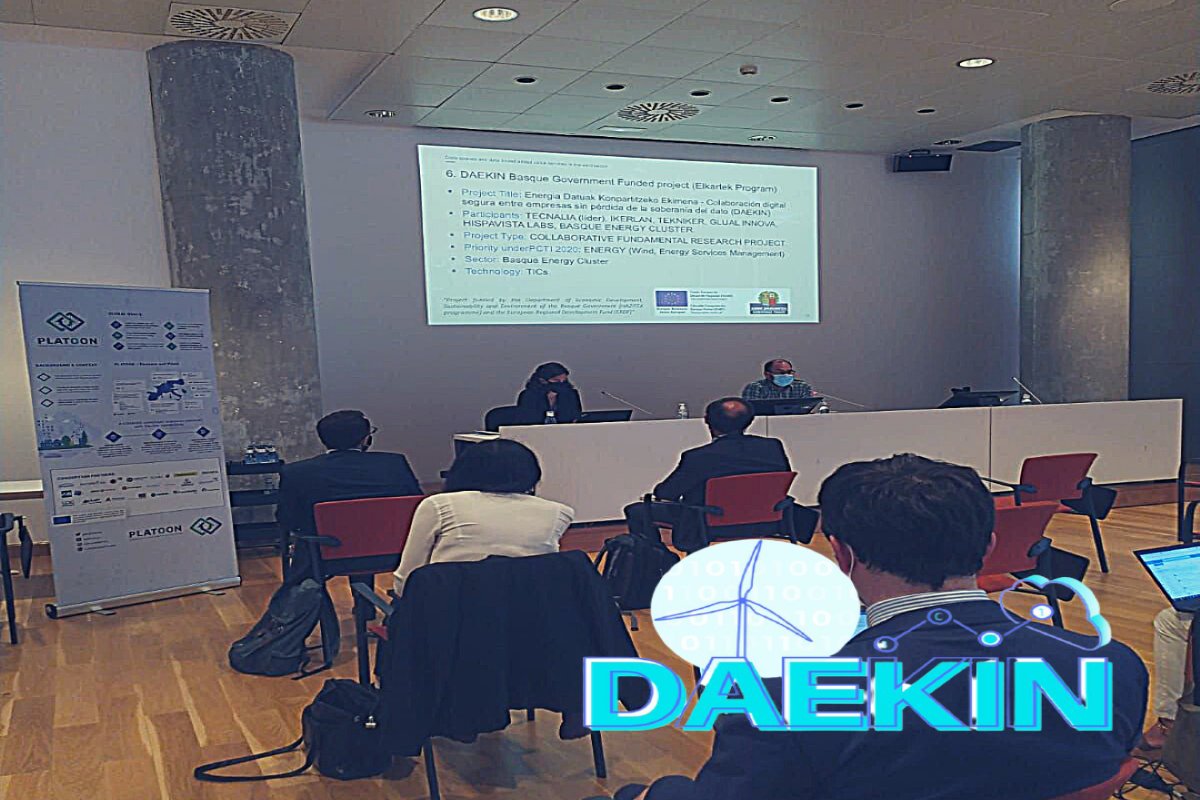 Keep up to date with our latest news.

On 23rd of September Eugenio Perea, Tecnalia's Director of Digital Energy, presented the DAEKIN project at the conference "Data sharing and governance for Energy applications" that took place in Bilbao. The event brought together 73 attendees and featured an outstanding panel of technical and institutional speakers.

The conference 'Data sharing and governance for Energy applications' is part of the dissemination activities for the business segment that the Basque Energy Cluster Association (ACE) coordinates within the H2020 PLATOON project, and was organised with the support of ENGIE, TECNALIA and the European OPEN DEI initiative.

The opening session, led by José Ignacio Hormaeche - Managing Director of the Basque Energy Cluster - was chaired by Cristina Oyón, Director of Technology, Innovation and Sustainability at SPRI, who was accompanied by Mark van Stiphout, Deputy Unit Director at DG ENERGY and Rolf Riemenschneider, Director of the IoT Sector at DG CONNECT, representing the European Commission. All of them highlighted the commitment of their respective institutions to digitalisation in the value chains of the energy sector as a catalyst for the energy transition through specific initiatives such as the Basque Digital Innovation Hub (BDIH) in the case of the Basque Government and the Digitalisation of Energy Action Plan (DoEAP) and the Common European Energy Data Space, in the case of the European Commission.

This was followed by two technical panels focusing on the technological challenges in the field of data sharing and the initiatives that are driving it forward at an international level. Erik Maqueda, Data Analytics expert at Tecnalia and Technical Coordinator of the PLATOON project, identified the technological challenges around Data Spaces as a solution to the existing barriers to digitisation in the energy sector; Silvia Castellví (IDSA) presented the guidelines for the design principles of Data Spaces, agreed within the framework of the OPEN DEI initiative; Prof. Antonello Monti (University of Aachen) and Dr. Valentina Janev (Institute Mihajlo Pupin) respectively discussed the role of smart grids in the energy transition and the activities carried out in this field in Serbia.

Regarding the initiatives underway to promote data sharing, their current status and progress in their activity were presented by Ana García on behalf of BDVA (Big Data Value Association), Thorsten Huelsmann on behalf of IDSA (International Data Spaces Association) and Philippe Calvez (ENGIE, Coordinator of the PLATOON project), on behalf of GAIA-X. As a common element in their speech, it is worth highlighting the interest and willingness to collaborate between all the initiatives to move towards a harmonised governance for Data Spaces.

The programme was completed with a pitch session involving eight H2020 projects involved in the OPEN DEI initiative and specifically in the energy domain, with the aim of identifying synergies and opportunities to develop a common knowledge base for data sharing in the coming years. Representatives from PLATOON, BD4NRG, BD4OPEM, COORDINET, INTERCONNECT, INTERFACE, PLATONE and SYNERGY presented their objectives, the technological developments they are working on to respond to the needs of data sharing in the different cases of application in the energy sector and the demonstration pilots planned to validate these developments. They were joined by the Elkartek DAEKIN project, as a regional Basque initiative in the field of data sharing.